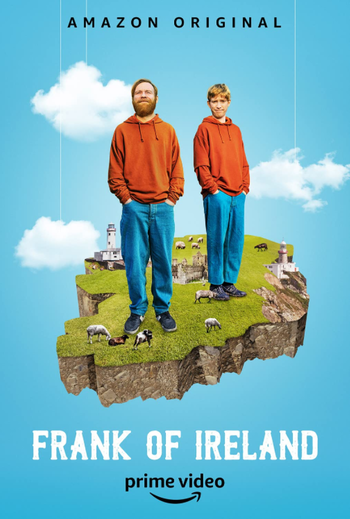 Frank Marron (Brian Gleeson) is an aspiring musician who sees himself as a legendary Irish singer-songwriter, but is hampered by his own prolonged childishness and larger-than-life ego. Still living under the roof of his long-suffering mother Mary (Pom Boyd), who wants him to move out for she can have the house to herself and her various male house guests and in an unresolved on-and-off relationship with his ex-girlfriend Aacute;ine (Sarah Greene) Frank is under pressure to grow up. Together with his loyal best friend Doofus (Domhnaill Gleeson) who despite his name does manage rare moments of sensible decision-making Frank endeavours to maintain his idyllic care-free living and pursue his musical vision. No matter how ridiculous things may turn out for all involved.

The series is available through Prime Video in most countries.

Frank of Ireland has examples of: