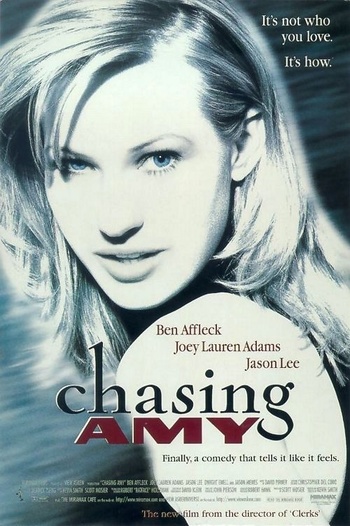 It's not who you love. It's how.
"She was the girl, I know that now. But I pushed her away. So, I've spent every day since then chasing Amy. So to speak."
— Silent Bob
Advertisement:

A 1997 romantic comedy-drama written and directed by Kevin Smith, and the third film in The View Askewniverse series.

Holden McNeil (Ben Affleck) is an artist who works fairly successfully for his "Bluntman and Chronic" comic along with his best friend Banky Edwards (Jason Lee). Holden meets fellow comic artist Alyssa Jones (Joey Lauren Adams) at a convention, and after connecting with her on an intensely interpersonal level finds himself greatly smitten; before he can make a move, however, he discovers that Alyssa is a lesbian. He is devastated by that information, but they still become incredibly close friends. There is one hitch, however: he is still in love with her.

This film was originally inspired by a brief scene in Go Fish (cowritten by Smith's friend Guinevere Turner, who has a cameo here), wherein one of the lesbian characters imagines her friends passing judgment on her for "selling out" by sleeping with a man. In real life, Kevin Smith was dating Joey Lauren Adams at the time he was writing the script, which was also partly inspired by her. Smith has even admitted that the film is basically an apology to Adams for his real-life overreaction upon learning of her sexual past while the two were dating (though he also makes it clear that her sexual history was nowhere near as wild as Alyssa's, only enough to make him feel inadequate and inexperienced at a young age).

Noted for its frank dialogue, Chasing Amy explores concepts of sexuality and love, how your feelings don't have an off switch and the social pressure for staying within one category. It was generally well-received, winning two awards at the 1998 Independent Spirit Awards (Best Screenplay for Smith and Best Supporting Actor for Jason Lee). Joey Lauren Adams was nominated for a Golden Globe for Best Performance by an Actress in a Motion Picture - Comedy/Musical. It's also Kevin Smith's only movie to be released as part of The Criterion Collection. There's even been speculation for years that it was a nose away from receiving an Oscar nomination for Best Original Screenplay.

Dave Pirner of Soul Asylum was the Musical Consultant/Producer on this film and wrote music for it.