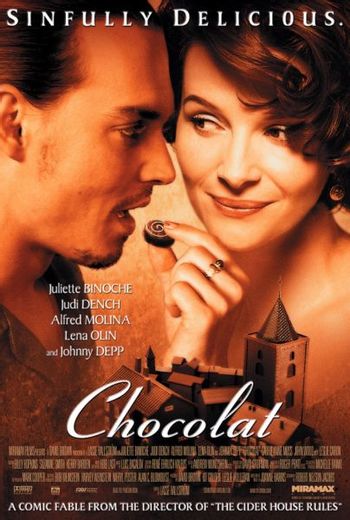 "I have a knack for guessing people's favorites."
— Vianne
Advertisement:

Chocolat is a 2000 British-American romantic comedy-drama film directed by Lasse Hallström and adapted from a novel by the same name by Joanne Harris.

Once upon a time, a European pharmacist/explorer fell in love with and married a South American woman who was destined from birth to move as the wind blows, sharing her "ancient cacao remedies" with unhappy people. He brought her to Europe, but she didn't stay with him, departing with their daughter Vianne to move from place to place with the "clever North wind."

In 1959, the now-grown Vianne (Juliette Binoche) and her own daughter Anouk (Victoire Thivisol) are living this same lifestyle — though Anouk hopes to settle down someday — and as the film begins they move into the stuffy, traditional French Catholic village of Lansquenet-sous-Tannes. The village is run by the Comte de Reynaud (Alfred Molina), a man who has stricter moral standards than the local priest and holds everyone to them.

Using the secret recipes of her mother's people, Vianne opens a chocolaterie during Lent, earning the Comte's disapproval. Although at first, the townspeople give her a chilly reception, they slowly warm up to her as they are tempted by her fabulous concoctions. She convinces abused wife Josephine Muscat (Lena Olin) to leave her drunk husband Serge (Peter Stormare) and come work with her at the chocolaterie. She reunites young Luc Clairmont with his grandmother Armande (Judi Dench), a passionate and sarcastic woman deemed a bad influence by Luc's conservative mother Caroline (Carrie-Anne Moss). Hidden passions left buried for years are brought to the surface with the help of the chocolate.

The Comte fears that Vianne is a threat to his control on the town and behaves accordingly, warning all the townspeople of the dangerous and evil nature of her chocolate. He spreads rumors about her atheism and liberal lifestyle, and even uses the local priest as a mouthpiece for his own ideas.

Conflict is further stirred up by the arrival of a group of Romani, led by the impetuous and handsome Roux (Johnny Depp). Vianne, recognizing fellow outcasts, is the only shop owner in the town not to "boycott immorality" and refuse them service. She and Armande even contrive to unite them with the more liberal members of the town during Armande's 70th birthday celebration.

Although she changes everyone else's lives in the process, Vianne herself is changed by the people she meets in the town, specifically Roux — with whom she develops a romantic relationship — Josephine, and Armande. Whether or not Vianne can overcome her wanderlust is as big a question as whether severity or joy will finally win out over the town.

Primarily remembered today as having been nominated for several Academy Awards, including Best Picture, in what commentators then and now regard as the most egregious example of Miramax Films' notorious Oscar campaigns; this resulted in a huge backlash that has dogged the film ever since. Based on a novel by Joanne Harris which apparently nobody reads, with all the Nightmare Fuel taken out. Leslie Caron has a small role as Madame Audel.

Not to be confused with the 2016 French film Chocolat

with Omar Sy, which is about one of the earliest successful black entertainers in France. Also not to be confused with Chocolate, a Thai film about an autistic girl who goes after her ailing mother's debtors to pay for her chemotherapy.

Tropes in the Original Novel and sequels
Tropes in the Film
s suggested that the movie was about someone selling aphrodisiacs disguised as chocolate. This happened in the film, sort of, but only once, and it didn't become a plot point.