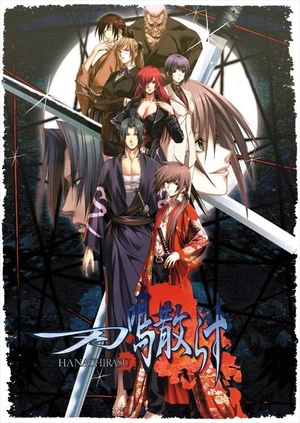 Hanachirasu ("Flower Scattering" but Hana is written with the kanji of sword and cry, the flowers are actually the sounds of swords) is Visual Novel / H-Game by nitro+. In a vein similar to Togainu no Chi, Hanachirasu features few supernatural elements and also uses an alternate history as its setting. Originally released in 2004 It was given a Fan Translation by TLWiki in November 2010 and was officially released in the US in 2015.

In 1945, the first atomic bomb test in America fails; as such. the United States is forced to invade Kyushu in hopes of ending the war in the Pacific, shortly after the Soviet Union invades Hokkaido. Japan stubbornly refuses to accept the Potsdam Declaration, and the "no surrender" motto adopted by Imperial Japan results in increased casualties for the Japanese, American, and Russian soldiers. A revised Potsdam Declaration is issued, one that maintains that Kyushu and Hokkaido will be occupied, but also allows Japan full sovereignty of the remaining islands; Japan immediately accepts.

The result is a new Cold War front in which the United States won over Japan with the promise of capitalist power. A new joint security is issued in 1969. But before it can be passed, a general known as Ishima Kaigen changes Japan forever.

After overthrowing the current government, Kaigen issues new laws in-order to remove Western ideals from Japan's "tainted spirit".Tokyo becomes the central basis for this. Firearms are banned, and a literal wall is constructed to emphasize its closure from other countries. Additionally, martial arts and swordplay become more widespread. Though Western idealists still maintain a war with those who wish to further Kaigen’s dream of a “pure Japan.”In the midst of this conflict comes the story of blood and vengeance of the mad swordsman Takeda Akane and his quest to face his one true rival, Igarasu Yoshia.

Compare Full Metal Daemon Muramasa, which share the same premise (and company), but with Humongous Mecha.