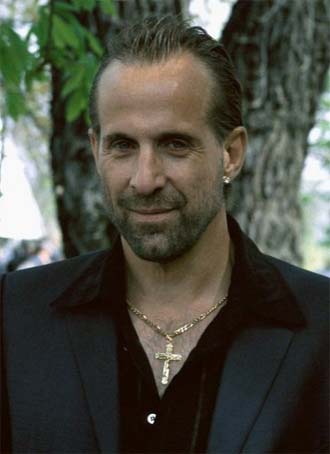 "We believe in noshing, Lebowski!"
"Believing in nothing, severing pinkie toes, and just generally giving off the impression that he's committed a couple of sex crimes lately."
— Cracked
Advertisement:

Allegedly, the reason for his name change is that he shared it with an older student. He wasn't even out of school and he made sure people wouldn't go around mistaking him for someone else.

He began his acting career with the Swedish Royal Dramatic Theatre, before his apparent discovery by Ingmar Bergman.

He made his name playing one of the Stupid Crooks in Fargo. Americans may also recognize him as one of the dino-hunters in The Lost World: Jurassic Park. Apart from that, this guy always gets typecast as Russians or Ukrainians.

Oddly, the smaller the role, the more memorable his characters tend to be. Peter Stormare (a devout Christian in real-life) is one of the best depictions of Satan in cinema....and it's in Constantine? (Implying that Keanu Reeves and Shia LaBeouf didn't turn in powerhouse performances.) He literally shows up in the last 10 minutes and steals the movie. Easily one of his best; maybe the best.

campaign featured him as a German pseudo-hip hop artist/"engineer" answering to V-Dub, whose shtick was violently un-pimping ze autos by smashing them to scrap and giving their owners Volkswagens.