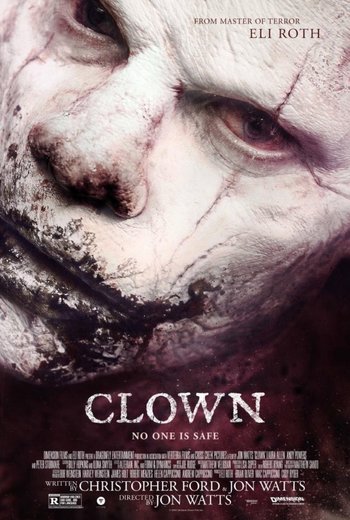 Clown is a 2014 horror film (released in the US in 2016), produced by Eli Roth and the Weinstein brothers.

Loving father Kent McCoy (Andy Powers) dresses as a clown for his son Jack's birthday, only to discover he can't remove the costume, which slowly begins turning him into a cannibalistic Monster Clown. His wife, Meg (Laura Allen), is caught between her desire to help Kent return to normal and her desire to protect Jack from him. She is aided by the only person who knows the history of the costume, a creepy guy named Herbert Karlsson (Peter Stormare), whom she must simultaneously try to prevent from killing her husband.

posted to Youtube by Jon Watts and Christopher Ford, with Eli Roth's name attached as a joke. Roth, impressed by the story idea

, bought the rights to the project, bringing Watts and Ford with him.