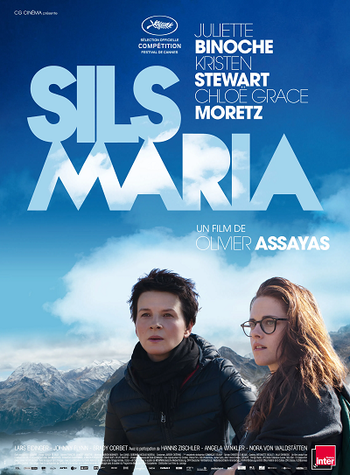 Maria Enders (Binoche) is an internationally famous movie and stage star plagued by the specter of white dwarf-dom, who received her big break starring as the young Sigrid in the play Maloja Snake by Wilhelm Melchior. The play concerns a heartless young girl ("Sigrid") who seduces a vulnerable older woman ("Helena") and eventually drives her to suicide. Following the suicide of Melchior, Maria joins a revival of Maloja Snake, this time playing the role of the older Helena, and cast as Sigrid is the Lindsay-Lohan-esque tabloid-fodder extraordinaire Jo-Ann Ellis (Moretz).

Maria retreats to Sils Maria, Melchoir's estate in the Swiss Alps to memorize her lines. In tow is her long-suffering and loyal-to-a-fault personal assistant, Valentine (Stewart). And while there, the real world begins to melt into the world of the script.

The film was released to wide acclaim, winning a Louis Delluc Prize for Best Film and a César Award (the French equivalent to the Oscar) for Best Supporting Actress for Kristen Stewart, making her the second American to win one.