Stay with the Aliens 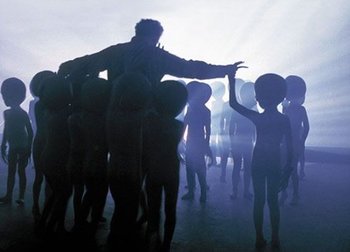 The aliens arrive, and they want an earthling to come with them. This is not anything harmful, like To Serve Man. They actually want a human to come with them to show all their wonders. Often this is an old man, who saw the aliens once and was called crazy ever since. So the old man not only gets proven right, but also gets to complete the trip he didn't finish the last time. Yet just as often, it's just someone whom the aliens make their Chosen One. If they return, they may be — different.

Much like the Undead Tax Exemption with people spontaneously appearing in the records, there never seems to be any legal investigation into someone literally vanishing off the face of the Earth.

Compare I Choose to Stay.