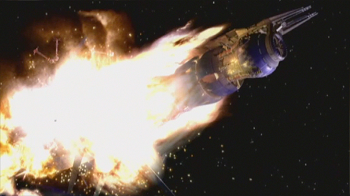 How will this end? In fire.
The Interstellar Alliance, based on the homeworld of the Minbari Federation, was founded in the Earth year 2261, shortly after the end of the Shadow War, twenty years ago. Twenty years of history. Those of us who have survived have seen it all. And those of us who understand, have been waiting, and dreading, the arrival of this day...
-Michael Garibaldi

At his home on Minbar, Sheridan is dreaming, and as he awakes he goes to watch the sun come up. Delenn follows a few minute later. She realizes he's been having that dream again, and they both know what it means. Sheridan's twenty years are almost up. As the sun comes up, he tells her to send the messages out.

Across the Alliance, on Earth, Mars, Centauri Prime messages are sent to General Susan Ivanova, Emperor Vir Cotto, and Mr. Garibaldi and Dr. Franklin, summoning them to Minbar for one final get together before then end.

Once they arrive, Franklin checks Sheridan out. He's still not quite sure how Lorien's healing worked, but his best guess is a few days. They take a few minutes to talk about Delenn, Sheridan feeling she'll get through it. She comes in just then and as Franklin leaves, they talk about the party they'll be having, Sheridan stressing that he wants it to be a happy occasion.

He gets his wish as later Garibaldi is telling a rousing tale that has everyone laughing. Vir starts talking about Londo, how he and Vir once heard the pak'ma'ra singing, and that Londo listened to it and declared that if there are any gods, that was their voice. "I miss him," Vir says. Sheridan proposes a toast To Absent Friends, in memory still bright, G'Kar, Londo, Lennier, and Marcus.

That night Susan and Delenn have a talk, Susan expressing surprise that they both seem so calm about it all. Delenn says they've had twenty years to talk about it and prepare, but she will still miss him. For her part, Susan is beginning to feel the weight of all her fallen friends, heard in the slight bitterness in her voice. Delenn has an offer for her; since John had been acting as leader of the Rangers lately, Delenn wants Susan to take over after he's gone. Susan wants some time to think about it, then goes to get some sleep. As she leaves, John comes up asking if she accepted. Delenn thinks she will.

That night, John finds himself reminiscing about Sunday when he was a kid. His father would take them out for a drive, to wherever they wanted. Tomorrow is Sunday and he wants to go for a drive. He has a number of reasons to go, he wants to be in space again, and he wants to help build the mythology.

Delenn: Always thinking strategy, even now.
Sheridan: Well, that's why you love me, ins't it?
Delenn: No. There are many reasons, but that's not one of them.

In the morning, he dons his old Army of Light uniform and goes to bid one final tearful farewell to Delenn. He then turns and leaves pausing only moment before he does.

Sheridan's destination is Babylon 5, which he boards to find nearly desereted. Commander William Neils, head of the shutdown crew, comes up and introduces himself. The station was turned back over to Earth a few years ago, but with the Alliance it's become more or less redundant. With looming budget cuts, Earth has decided to decommission it. Since the abandoned station would be a navigational hazard, it needs to be demolished. Sheridan, either losing strength or overcome with emotion, begins wandering the corridors, eventually finding himself where he rallied the Non-Aligned Worlds into a force to end the Shadow War once and for all, reliving the moment in his mind.

He's so caught up in reminiscing he fails to notice Zack, with a significant limp, come up. He'd come back here about six months ago out of boredom, which was why he hadn't gotten his invitation. They spent some time reminiscing about the place and what they accomplished here. Sheridan suddenly thinks of Lorien again, and feels the need to get going.

Coriana 6 is next, where the Shadow War ended. As he arrives, Sheridan is visibly declining, while on Minbar, Delenn is spending the first of her nights alone. The ship's monitors record Sheridan's life signs failing and he orders them all shut off. As he sits in silence, a light appears outside.

Lorien: Who are you? What do you want? Why are you here? (appears behind Sheridan) Where are you going?
Sheridan: Lorien.
Lorien: Did you think we had forgotten you? We have been waiting for you.
Sheridan: Beyond the Rim.

Sheridan says there's still so much he doesn't understand, but Lorien says that is how it should be. Sheridan's time is done, it is time to rest. As he speaks, light begins to fill the ship.

Sheridan: Well, look at that. The Sun's coming up.

Sheridan's eyes close and the light goes out.

Ivanova: An expedition to Coriana space found Sheridan's ship a few days later, but they never found him. All the airlocks were sealed, but there was no trace of him inside. Some of the Minbari believe that he'll come back someday, but I never saw him again in my lifetime.

Ivanova meets with the others aboard Babylon 5, and one by one they say their final goodbyes to the place that was their home through so much and head off. A maintenance worker (J. Michael Straczynski) takes one last look around and shuts off the power as the shuttle carrying the crew flies out amidst an honor guard of capital ships from the Alliance member worlds. Moments later, the fusion reactor overloads, destroying the station.

The story of Babylon 5 closes, and the major players begin returning to their normal lives, Garibaldi to his family, Franklin to Earth, Vir to the Royal Court, Susan and Delenn to Minbar, where Susan takes up leadership of the Rangers.

Ivanova: Babylon Five was the last of the Babylon stations; there would never be another. It changed the future, and it changed us. It taught us that we have to create the future, or others will do it for us. It showed us that we have to care for one another, for if we dont, who will? And that true strength sometimes comes from the most unlikely places. Mostly though, I think it gave us hope that there can always be new beginnings, even for people like us. As for Delenn, every morning for as long as she lived, Delenn got up before dawn and watched the sun come up.

Out on the porch, Delenn sits by herself, Sheridan appearing for a moment, as she reaches her hand toward the morning sun.