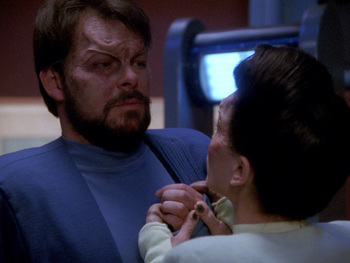 (No relation to the feature film Star Trek: First Contact)

On Malcor III, a team of Malcorian doctors receive a critically injured patient. As they prepare to save his life, we discover that this Malcorian is actually William Riker in disguise! The doctors quickly see through his surgical implants and realize that he's an alien. Malcor III is on the verge of achieving warp technology, but they still believe that they're the only sentient species in the universe. The doctors keep the information hush to avoid a panic.

Picard and Troi beam down to the planet to introduce themselves to Science Minister Mirasta Yale and make first contact. While showing her around the Enterprise and giving her the standard spiel about the greater intergalactic society that awaits them, Picard admits that they have been studying the Malcorians for some time but had to accelerate their schedule when one of their officers went missing. Yale urges Picard not to tell Chancellor Durken when they meet him, as a faction within the government could react violently should word get out.

Meanwhile, Riker's attempts to maintain his disguise fail, and he's held prisoner at the hospital. A nurse volunteers to help him escape in return for making love to him, but this kinky plan ultimately fails, and Riker is beaten within an inch of his life. Security Minister Krola, a zealot, finds out and insists upon interrogating Riker before handing him back over, a move that could be fatal. Meanwhile, Durken confronts Picard with his deception and states that this development could seriously jeopardize Malcor III's relationship with the Federation.

Barely clinging to life, Riker insists that he's on a mission of peace, but Krola demonstrates that Riker's phaser is a weapon. He uses it to fake his own murder, making it look like Riker shot him, to throw public sentiment against the Federation. Crusher and a medical team arrive just in time to beam both Riker and Krola to sick bay. They save Riker's life and discover that Krola was merely stunned. The phaser is a weapon for self-defense, after all.

Durken chastises Krola but agrees with him that Malcor III is not ready to join the intergalactic community. He regretfully tells Picard that he will have to reject the Federation's offer for guidance into a new stage of their civilization. He puts the warp experiments on pause and plans to increase funding in education and social development so that one day they'll be ready to start journeying into the stars. Mirasta Yale, however, is ready now and asks permission to leave with the Enterprise. Picard is sad that first contact with the Malcorians didn't work out but happily agrees to have quarters assigned to their new passenger.