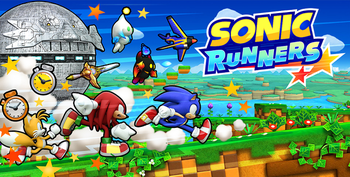 Don't look back, don't give up, don't let go, and keep on running.
Advertisement:

Sonic Runners was a free-to-play Endless Running Game for iOS and Android in the Sonic the Hedgehog franchise developed by Sonic Team, released worldwide on June 25, 2015note It was released earlier in Canada and Japan as a soft launch and shut down on July 27, 2016 due to poor revenues and reception.

In this game, players follow the antics of Team Sonic as they fight to protect Omochao and their animal friends from the heinous plots of the nefarious Dr. Eggman, his loyal servants Orbot and Cubot, and his army of Badnik minions. Players progress the plot by playing the game, which takes the form of an endless obstacle course Sonic and pals speed through on a quest for the most points possible. On the way, they'll encounter myriad hazards, evil Badniks, and Dr. Eggman himself, all who intend on standing in the player's way.

A sequel titled Sonic Runners Adventure was later released. Not to be confused with Sonic Dash, an earlier Sonic endless running game.

And because this is Sonic the Hedgehog with its extensive Fan Game and Game Mod scenes, a group of fans have taken it upon themselves to unofficially bring the game back online after its shutdown and expand it as Sonic Runners Revival

, still in active development and service well into 2022.