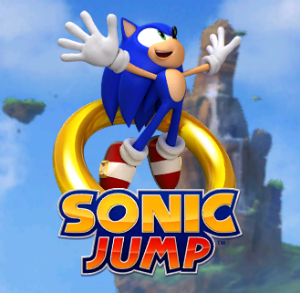 Jumping is bigger and better than ever with Sonic.
Advertisement:

Sonic Jump is a Spin-Off title in the Sonic the Hedgehog series, initially released for the T-Mobile Sidekick in Japan in 2005 and the rest of the world in 2007 (and got a subsequent update which was billed as a sequel), and remade for the iOS and Android mobile platforms in 2012. The story is that Dr. Eggman has kidnapped the small animals of South Island, and Sonic and co must save them.

The gameplay is fairly unique for a Sonic game—instead of a standard high-speed side-scroller, it's a vertical scrolling platformer, highly in the vein of Doodle Jump, and you control Sonic via motion sensors. Unlike Doodle Jump, there are actual levels and bosses, not to mention power-ups such as the rings (used to buy items and unlock other characters), speed up shoes and the magnet, as well as the usual Sonic plethora of pretty art and catchy tunes. It also provides replay value with the three red rings to collect in each level.

The game had a free sequel called Sonic Jump Fever which was released in 2014 and removed in 2018.

Tropes used in this game include: