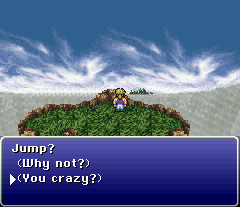 Naturally, you have to jump to continue the game.
>KILL DRAGON
WITH WHAT? YOUR BARE HANDS?
>YES
CONGRATULATIONS! YOU HAVE JUST VANQUISHED A DRAGON WITH YOUR BARE HANDS! (HARD TO BELIEVE, ISN'T IT?)
— Colossal Cave
Advertisement:

Video game logic is not real-world logic. Sometimes they allow you to do something suicidally dangerous (or at least utterly pointless) and, far from forcing you to face the consequences of your actions, they reward you for this behavior. On the flip-side, the player finds themselves in a scenario where they feel obligated to make a practical decision and, far from avoiding Too Dumb to Live, they are punished for this behavior, sometimes by death. This is a Violation of Common Sense; one does not expect to be rewarded for otherwise nonsensical actions, or to be punished for otherwise sensible ones.

Sometimes this is an unexpected result of Video Game Physics, but just as often it's a deliberate solution to a puzzle or a way to collect useful items. As always, Tropes Are Not Bad — a Violation of Common Sense can be entertaining and amusing when well-executed, just as it can be confusing or annoying when not properly set up. Comedy Video Games can make this trope part of the fun, just as more serious games won't get away with this nearly as easily.

Compare and contrast both Press X to Die (where an obviously stupid action has harmful results), Stupidity Is the Only Option (where the player is forced to do something stupid in order to continue the game), and Unexpectedly Realistic Gameplay (where following common sense is expected, but surprising in the context of the game). Also compare Moon Logic Puzzle (where the solution to a puzzle makes absolutely no sense from a normal standpoint). Examples of things that make no sense in general (but that we accept because it's a video game) belong in the work's Headscratchers tab or in one of the Acceptable Breaks from Reality subtropes.