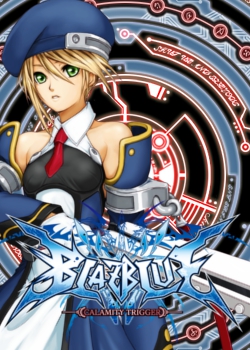 The alternate truth is yet to be found...
Advertisement:

Long ago, a terrible monster called "The Black Beast" appeared and began destroying everything in its path, spreading a toxic substance called "seithr" across the planet and threatening to cause The End of the World as We Know It. Humanity was on the verge of extinction when a group known as the Six Heroes arose and developed weapons to fight the Black Beast: the "Armagus", an artificial form of magic powered by seithr that anyone could use. With humanity empowered by the Armagus, the Black Beast was defeated and the Six Heroes disappeared into history. This event became known as the "First War of Magic", aka "The Dark War".

Humanity began reconstruction in low-seithr areas and formed the Novus Orbis Librarium note "New World Void Space Cue Administration Bureau" (otherwise known as the N.O.L. or "The Library") to govern the world and the grimoires that controlled the Armagus. However, the N.O.L. quickly grew into The Empire and began to abuse their power, aiming to create a hostile monopoly on the Armagus grimoires. A resistance movement attempted to rebel against the N.O.L's growing power in an event known as the Ikaruga Civil War (aka Second War of Magic), but were defeated. As a result, the N.O.L. imposed even harsher restrictions on the Armagus, making Armagus possession (outside of the N.O.L's own members) punishable by execution without trial.

In the year 2199, several branches of the N.O.L. are suddenly destroyed by a One-Man Army known only as "Ragna the Bloodedge". Wielding a powerful Armagus called the Azure Grimoire, he declares the start of a one-man war against the N.O.L. and their tyrannical grip on the world. In retaliation, the N.O.L. imposes the largest bounty in history to anyone who kills him.

As news spreads that Ragna has arrived at the 13th Hierarchical City of Kagutsuchi, a ragtag bunch of N.O.L. operatives, bounty hunters and vigilantes straight from the Dysfunction Junction descend upon the city, each one seeking out Ragna for their own purposes. Meanwhile, Ragna heads for the dark secret lurking in the centre of Kagutsuchi, a single purpose resting in his heart.

The game uses a 4 button system: Weak Attack (A), Medium Attack (B), Strong Attack (C), and a unique Drive Attack (D) for each character.

The Arcade version of Calamity Trigger was released on November 20, 2008, and console ports for the PS3 and Xbox 360 were released on June 30, 2009. The console version included online play, a new Story Mode that is set up somewhat like a Visual Novel, a new anime opening by J-Pop artist Kotoko as well as several new anime cutscenes, English voice acting, and much, much more. Console releases are sold in retail and premium editions which include a combo DVD, an artbook (several of these are now backordered, unfortunately), and a limited edition soundtrack, which includes every song in the game except for the main theme and the two extra songs for certain characters, and instead replaces them with remixes by rap artist Oh No. The European version was released much, much later. April 2nd, 2010, to be specific. As compensation, it has all the DLC included for free.

There's a PSP port, entitled BlazBlue: Calamity Trigger Portable, and a Windows PC version of Calamity Trigger, released for the Games for Windows platform on September 2, 2010. The latter is available for $35 and, much like the PAL release, for the fans who waited so long, includes all of the console DLC for free. The same PC port was brought to Steam (albeit without GFWL parts or online VS.) on February 14th 2014, then later on April 14th to GOG.com the same year.