Western Animation / Barbie & Her Sisters in the Great Puppy Adventure 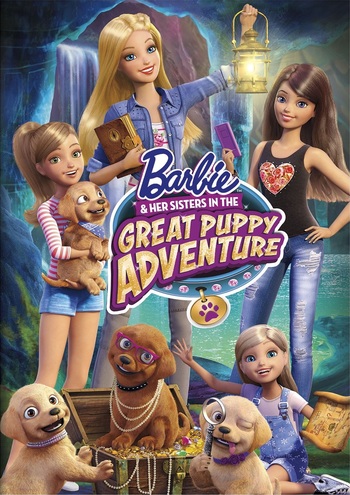 Barbie & Her Sisters in the Great Puppy Adventure is a Barbie movie released in October 2015. This is the third film in the series to feature Skipper, Stacie and Chelsea (Barbie's three younger sisters), but follows an entirely different continuity than both A Perfect Christmas or A Pony Tale. In fact, this movie follows the same continuity as Barbie Dreamhouse Adventures.

Barbie, Skipper, Stacie and Chelsea are spending part of the summer visiting their grandmother, who lives in the town of Willows, Wisconsin (which is where Barbie and her sisters lived until they and their parents moved to Malibu). During this, each of the four sisters adopts a puppy (Taffy for Barbie, DJ for Skipper, Rookie for Stacie and Honey for Chelsea)—while at their grandma's house, they go through stuff in the attic and discover an old treasure map that used to belong to their grandfather. With carnies looking to stake a claim on the sleepy town of Willows, the girls (and their puppies) go on a Treasure Hunt to find the treasure and save the town.