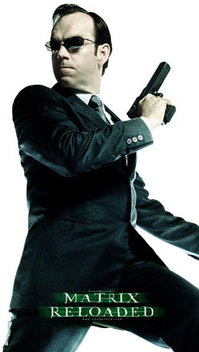 A very common pose for movie posters and game cover art is to feature the main character posing with a firearm, often a pistol. A pistol is usually used to convey that the character is armed and dangerous and has intent to shoot, but not as overpowering as an assault rifle would be. Sometimes this is done for marketing reasons: a character may be known for their martial arts or other character traits, but if they hold a pistol anywhere in the story it'll be presented in promotional art to make the work look more action-focused and appeal to a broader audience. But since a pistol is small, it's also easier to downplay it visually by holding it to the side.

This isn't exclusive to pistols: assault rifles and shotguns are also used for more aggressive characters, but they're more limited in how they can pose and express with them. It is also common to spoof this by having something else being held, like a banana or finger-guns, but still pose with the same serious reverence as with a real firearm.

See also: Sean Connery Is About to Shoot You, the more audience-aggressive variant.