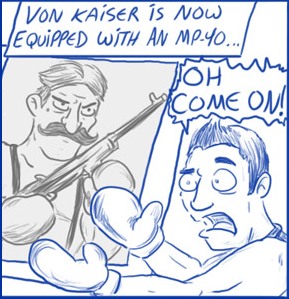 Hey, wait a minute! How does he pull the trigger with boxing gloves on...?
"Hey, who allowed them to join this tournament? They're way too strong to compete; I mean, what's up with that? Someone is going to have to take that team down!"
— Announcer, Capcom vs. SNK 2note Funnily enough, this is not in reference to any particular enemy (although Shin Akuma and Ultimate Rugal are pretty damn broken); this is just one of the random match-end quotes from the announcer
Advertisement:

A type of AI opponent in a Fighting Game who breaks the rules that enforce Competitive Balance to such an absurd degree that they are considered to be vastly superior to every other character in the game. The SNK Boss combines Nintendo Hard with The Computer Is a Cheating Bastard and takes them Up to Eleven. Powers may include:

If the boss is playable, such as upon defeat or paid and hired, they are significantly weaker and more balanced for actual play. A non-weakened playable SNK Boss is most certainly banned in any competitive tournaments where it would be a Game-Breaker for one human player to use on another.

In some fighting games, the Final Boss is a unique opponent in both design and ability (such as a 30-foot Eldritch Abomination) that is Purposely Overpowered and only appears in single-player/non-competitive game modes; it's slightly more sensible that such a boss would have those high-powered attacks rather than a human-sized villain. It can also feel pretty good for a player who manages to use an otherwise-mortal badass to beat the crap out of a godlike monster.

These bosses originate from the days of arcade machines, where the high difficulty level was used to separate players from their pocket change while attempting to register their initials in the top spot of the machine's High Scores table. In console games, side effects of continued exposure to an SNK Boss may include broken controllers and increased sales of GameSharks to "cheat back". Occasionally, these bosses may have an Achilles' Heel that utilizes special moves from characters that usually have limited utility. It is unknown whether these are intentional or not.

In cases where SNK Bosses are unlockable via real money, the players are willing to spend extravagant amounts of money to get them. Such practices led to the new variation of this trope, $NK Bossnote "$NK" is a Fan Nickname for SNK whose mobile entries have very blatant uses of making people forking up cash for powerful units, even including the nasty boss ones.

Is there an upside to this? Gameplay and Story Integration. Given that characters of this kind are frequently talked up in the story as being terrifying and powerful, if they fall into this category then at least the player doesn't feel like all the hype and drama was over nothing.

Takes its name from the company SNK, which seems to love making bosses like this and having each successive one top the last. This is also a case of Follow the Leader, especially with Arc System Works.

While this trope primarily applies to fighting games, it can also apply to non-fighting games, provided they are similarly competitive and have similar ways of ensuring Competitive Balance. A Racing Game, for example, may have a champion with an absurdly tricked out car and a knowledge of the track that combine to give it an advantage no matter which vehicle/racer you choose.

Note, SNK Boss is not a catch-all term for an overly hard, cheap, or even mechanically unusual boss. It's the way the boss breaks the *competitive* balance of a largely *competitive* game that makes it an SNK Boss. By definition, bosses of largely single-player experiences — RPGs, Platformers, Stylish Action, etc. — are not SNK Bosses due to those games being non-balanced by their very nature.

Subtrope of Fake Difficulty and The Computer Is a Cheating Bastard. See also Perfect-Play A.I., whose difficulty arises less from outright cheating, and more from a flawless battle strategy. Do not confuse with That One Boss, which describes a difficult boss as declared by a majority and technically fights on a much fairer level when compared to this trope. See also Easy Levels, Hard Bosses. Don't be surprised if they can only be toppled via Not the Intended Use, chiefly AI Breakers.