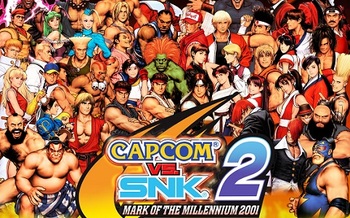 "2001 is the year we make contact!"
"This battle is about to explode!"
"This is gonna be a match to remember!"
"Live and let die!"
"Go for broke! FIGHT!"
— The announcer
Advertisement:

This time, the Ratio system was modified to allow the player to give ratios to the characters as they wished, and six Grooves to choose from, plus a customized system which can be created by the player themselves. Like the first game, an Updated Re-release of this game is available, titled Capcom vs. SNK 2 EO. Depending on the version, EO stands for Extreme Offence or Easy Operations. Unlike CvS Pro, however, it doesn't add any characters, instead providing an alternative, beginner-friendly control scheme.

Hey, who allowed them to write this page? It's way too strong to compete; I mean, what's up with that? Someone's gonna have to take that Troper down!