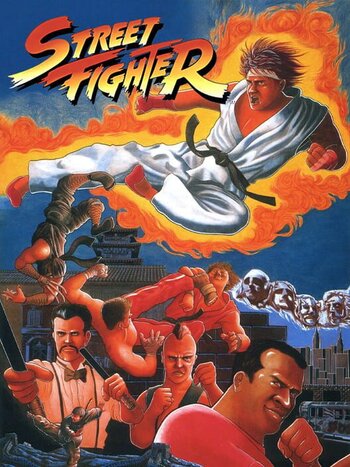 I thought Street Fighter II was the first one...
"What strength! But don't forget there are many guys like you all over the world!"
— The warbled voice of the defeated opponent after finishing a stage.
Advertisement:

Street Fighter is a Fighting Game which was released in arcades in 1987 and the first installment in the Street Fighter series. The game features two martial artists, Ryu and Ken, who travel around the globe taking on some of the best fighters in the world, culminating with a match against the massive Thai kickboxer Sagat.

It's a far cry from the sequel that revolutionized the industry, but it did feature many of the staples of the series: a six-button control setup; the best-out-of-three match structure; Ryu and Ken, naturally; and even many of the now-common motions for special attacks. Alternate arcade cabinets could be found that were also the first to use a two-button, pressure sensitive layout rather than the standard cherry switch six-button layout, one for punches and one for kicks, to control the strength of the attack. It was confusing to use and more expensive to maintain than most standard cabinets, so a version that featured the more familiar six-button configuration seen in all the follow ups was offered as a cheaper alternative.

A port of the game, Fighting Street, was released for the TurboGrafx-CD (and, later, the Wii Virtual Console

) as well as more properly named ports on PC.

You've outlasted the best! You are now the strongest street troper in the world!