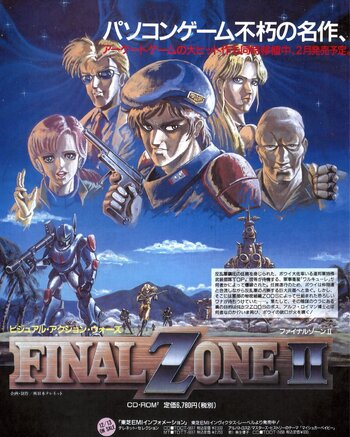 Final Zone, also known as FZ Senki Axis in it's Japanese release, is an Isometric view Run-and-Gun action game made by Wolf Team (before they're merged with Namco) for the Sega Genesis, TurboGrafx-16 and the Sharp X68000.

You are Howard Bowie, an elite soldier and the Commander of the Elite military unit called "Team Undead". Controlling your powerful, heavily-armed K-19 Phantom New Age Power Suit (NAP) exo-suit, you single-handedly take on legions of techno-terrorists in control of some unspecified Weapon of Mass Destruction and are threatening to use them.

A sequel, Final Zone II, is released, also in 1990 (merely 8 months later). Howard Bowie is back, and has been promoted to being The Leader of a bunch of new recruits, consisting of his second-in-command Sub-Lieutenant Momoco Ring, Commander Hanna Franks, heavy weapons specialist Lieutenant Randy Hansen and saber combat expert Izak Velder. A botched mission leaves most of Howard's team except his recruits dead, and they must continue their mission from there; unlike the first game the player is allowed to choose between the five protagonists, each having different stats, strengths and weaknesses. The sequel also allows firing in eight instead of only four directions, and cutscenes in-between levels to narrate a story.