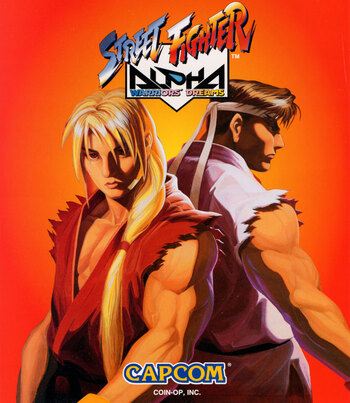 In 1995, Capcom released a long-awaited sequel — or rather, an interquel to Street Fighter II, Street Fighter Alpha. With a distinctive anime look based on Street Fighter II: The Animated Movie, the Alpha trilogy took place between the first two Street Fighter games and expanded the Backstory of some of the major characters, notably: Guile being deployed on a doomed mission to fight M. Bison (as well as the events that lead to the demise of his friend, Charlie), Ryu's flirtation with The Dark Side and his run-ins with a Blood Knight named Akuma, Cammy's past as a Bodyguard Babe for Bison, and Bison's true nature as an evil entity who keeps jumping between bodies to survive.

The series also had a manga adaptation.

Tropes distinct to, or introduced in, this subseries: