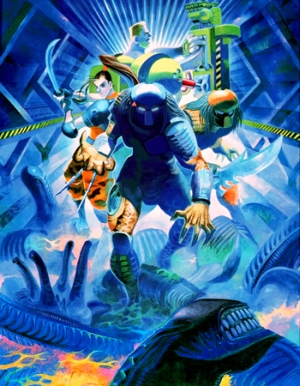 A shuttle crashes in the city of San Drad, California, carrying with it a deadly cargo of Xenomorphs. Two cyborg soldiers, Major Dutch Schaefer and Lieutenant Linn Kurosawa, are trapped while fighting their way to the central hive, only to be rescued by a group of Predators. They decide to work together to rip the heart out of the infestation.

Up to three players select from four playable characters. The Predators provide a warrior and a hunter, while the humans are represented by the aforementioned cyber-enhanced soldiers: Major Schaefer (the hero of Predator) and Lieutenant Kurosawa (who has several Lawyer-Friendly Cameos in later Capcom games). Together they wield a wide variety of weapons for fighting the Aliens invading Earth in great numbers.