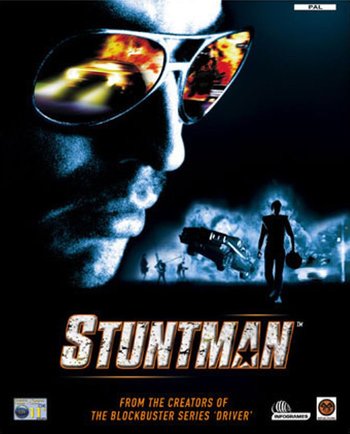 Let the bassline get ya.
"In the days of its infancy, the stunt performer's profession was pioneered by the daring and ingenuity of acrobats and circus acts. As the public's demand for on-screen chases, crashes, jumps, smashes, and explosions is never satisfied, so the stunt performer has evolved into a highly-trained professional. This is not a life for the timid. This is where men and women challenge the impossible, and make it happen, before your eyes."
— The opening narration of the original Stuntman
Advertisement:
"Every mangled mass of steel has a story to tell."
— The opening words of Stuntman: Ignition

Overtake that car! Get close to the explosion! Describe Stuntman! Cut, that was too slow!

Stuntman, developed by Reflections Interactive and published by Atari, is a 2002 Driving Game about a movie stuntman who works on several films that sound incredibly similar in concept to real films. Each chapter focuses on a specific movie, which is split up into different scenes. During each scene, the player has to hit the stunts the Director (who sounds the same no matter what the film is) calls out, with each stunt being some kind of manoeuvre like jumping off a ramp, scraping against cars/walls while sparks dramatically fly off, or driving under a falling pillar just in the nick of time. The more stunts the player hits, the higher rating they get for the film. Mess up too much, and it's a restart for you. Expect to be doing exactly that a lot in the later levels.

A sequel, Stuntman: Ignition, was developed by Paradigm Entertainment, published by THQ, and released in 2007 for the PlayStation 2, PlayStation 3 and Xbox 360; it toned down the difficulty and featured a new scoring system.