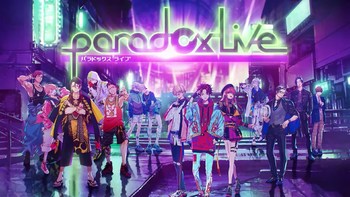 Paradox Live is a multimedia project made by GCrest (100 Sleeping Princes and the Kingdom of Dreams, AkaSeka, Hoshinari Echoes) and Avex. The series has an emphasis on Hip-hop and Rap.

The series takes place in the near-future where rappers perform with items made of a special metal called 'Phantometal' in a new music movement known as 'Phantom Lives', said to be massively popular among the youth. 10 years ago, a top group named 'Buraikkan' performed at Club Paradox, only for the club itself to close down and Buraikkan disappearing. Now, 4 teams have been invited by the mysteriously revived Club Paradox to compete to be the top rap group with a prize of 10 billion yen awarded to the winner and a chance to challenge Buraikkan.

The first album, titled 'Paradox Live: Opening Show' was released on February 12th 2020, featuring the debut of the 4 groups: BAE, The Cat's Whiskers, cozmez and Akan Yatsura. The 1st Stage Battle started on 31 March 2020 and ended on 20 March 2021, where cozmez was declared the overall winner. During the Dope Show live concert on 20 March 2021, a new shuffle unit project which mixes the 4 groups around was announced as well as a stage play series that will begin in Fall 2021.

On the series' 2nd Anniversary livestream, the new season Paradox Live: Road to Legend was announced for a 2022 release - a new Phantom Live season to be hosted by legendary rap duo Buraikkan, the season not only brings back the original 4 units, but also introduces 4 brand new competitors - Visty, AMPRULE, 1NM8 and Gokuluck.

You can check out Paradox Live in both avex

and the official Paradox Live Channel

. All songs are available worldwide through Apple Music and Spotify.