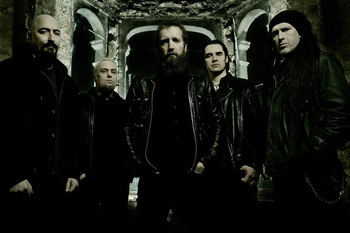 Obligatory photo of the band.
Paradise Lost are a five-piece metal band formed in 1988 in Halifax, England. Initially a death/doom band, Paradise Lost changed their direction with their albums Icon and Draconian Times, pioneering the Gothic Metal subgenre, vocalist Nick Holmes changing his vocal style from a death growl (used on the band's first three albums) to clean singing. The name "gothic metal" is also derived from the band's second album, Gothic, which featured many of the trademarks that were to become canonised in gothic metal.
Advertisement:

Paradise Lost's fifth studio album, Draconian Times was released in 1995 and is considered to be the band's most critically and commercially successful release, having notably sold over one million copies worldwide.

In 1997, they changed their look and style, and they began to experiment with synthrock and electronica. This direction, started with the album One Second, continued with their next two albums, Host and Believe in Nothing, the latter having more rock elements. The band appeared to be shedding their metal roots for good until Symbol of Life was released, signifying Paradise Lost's return to metal, albeit with a different sound to Icon. This return to their roots was codified by their next album, which was self-titled and sounded closer to their "classic" era. They have primarily been a gothic metal band ever since.

Starting from The Plague Within, Paradise Lost's style has shifted to a mix between their early and current eras, combining the death/doom sound of Lost Paradise, Gothic, and Shades of God with the gothic metal they later innovated.

Since 2013, Nick Holmes has returned to his death metal roots as lead singer for the band Bloodbath, and is currently their longest serving vocalist yet.