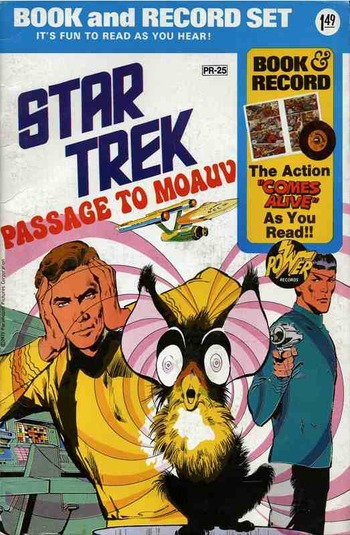 Passage to Moauv is a Star Trek audio drama written by Alan Dean Foster and released on vinyl in 1975 by Peter Pan Records. A comic book was also included in some editions so that listeners could read along.

The starship Enterprise is on a cat-sitting mission. More to the point, it has been asked to transport the Moauvian ambassador's pet waul, Ewass, from Centaurus base to Moauv. The catlike waul is not happy about the voyage, particularly its interment in sickbay with the other experimental animals, and it makes its displeasure known to the entire ship—both in the form of an irritating wail and a psychic attack designed to ward off predators.

Then it escapes from sickbay, and all hell really starts to break loose. Now the crew must track down and capture a frightened alien cat whose psychic feedback has them all meowing and hissing at each other...