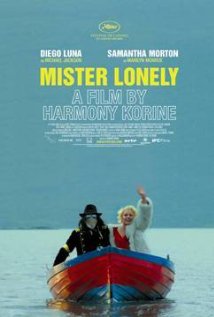 Mister Lonely is a 2007 Independent Drama written and directed by Harmony Korine. A (comparatively) straightforward outing for the notoriously opaque filmmaker, it tells the story of a lonely Michael Jackson impersonator (Diego Luna) living in Paris. Confused, adrift, and terrified of death, he happens to meet the acquaintance of a cheery, idealistic Marilyn Monroe impersonator (Samantha Morton), who invites him back to her castle in the Scottish Highlands, where she and a whole clan of celebrity impersonators live in peace and harmony...mostly.

Meanwhile, a priest (played by Korine-regular Werner Herzog) and a handful of Nuns operating in an unnamed Banana Republic discover a peculiarity that just may be Divine Intervention.

Boasting Korine's largest budget yet, and the first of his movies to feature his wife, Rachel Korine, Mister Lonely bears little resemblance to anything else in the Writer-Director's filmography. Where he would go next, however...

This Film Provides Examples of the Following: