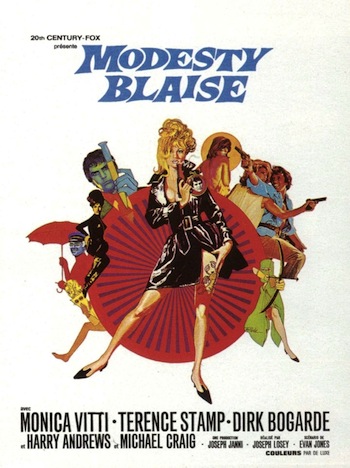 Modesty Blaise is a 1966 comedy action/Spy Fiction film directed by Joseph Losey. It is loosely based on the Modesty Blaise comic strip created and written by Peter O'Donnell, and stars Monica Vitti as Modesty Blaise, Terence Stamp as Willie Garvin, and Dirk Bogarde as the villain, Gabriel.

O'Donnell wrote the scenario for the movie, but the screenplay went through multiple rewrites and the end result differs significantly from the original. Changes range from the relatively trivial, such as hair colour, to ones that horrified the comic strip's fanbase: the coldly competent Modesty is depicted as a bubbly (though still strangely competent) airhead, and Platonic Life-Partners Modesty and Willie fall in love and decide to get married.

The storyline is as follows: Modesty, a secret agent whose hair color, hairstyle, and mod clothing change at a snap of her fingers, is being used by the British government as a decoy in an effort to thwart a diamond heist. She is being set up by the feds, but is wise to the plot, and calls in sidekick Willie and a few other friends to outsmart them. Meanwhile, at his island hideaway, Gabriel, the diamond thief, has his own plans for Blaise and Garvin.

O'Donnell wrote a novel based on his version of the screenplay, which (unlike the film) was successful and led to many sequels.

Quentin Tarantino is a fan of this movie; the look of Modesty influenced the look of the DIVAS in Kill Bill.

Since the film's release, there have been two additional films produced adapting the comic strip: a 1982 Pilot for a never-produced Americanized series that aired as a TV movie featuring Ann Turkel in the lead role, and in 2004, My Name is Modesty was a low-budgeted production starring Alexandra Staden as a young Modesty prior to her meeting Willie Garvin.