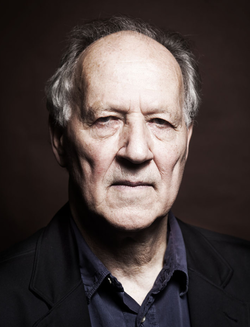 Directing is a complicated profession.
"There are deeper strata of truth in cinema, and there is such a thing as poetic, ecstatic truth. It is mysterious and elusive, and can be reached only through fabrication and imagination and stylization."
— "Minnesota Declaration", 1999
Advertisement:

Werner Herzog (born September 5, 1942 in Munich as Werner Stipetić) is a German movie director and screenwriter who has emerged as the most successful of the German New Wave filmmakers. He has also dabbled in acting and voiceover work.

He is beloved on the arthouse circuit and with several mainstream successes under his belt, most notably with actor Klaus Kinski. His films, both fictional and documentary, are often slow and atmospheric, but are universally beautiful and human. Really, his films only have one subject - the infinite power of human will and the subsequent potential for self-destruction.