Film / What Dreams May Come 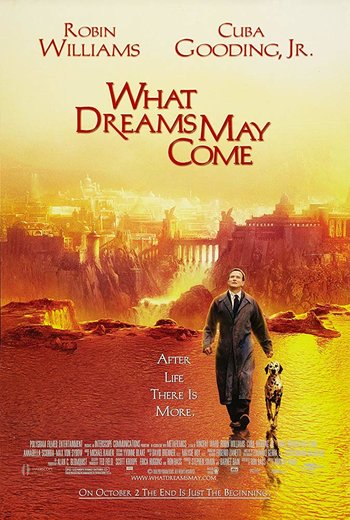 "After life, there is more. The end is just the beginning."''
...To die, to sleep;
To sleep: perchance to dream: ay, there's the rub;
For in that sleep of death what dreams may come
—William Shakespeare, Hamlet Act 3, Scene 1
Advertisement:

What Dreams May Come (1998) is a dreamlike, slightly trippy journey through the afterlife, as experienced by Chris Nielsen (Robin Williams), and his soul mate Annie Collins (Annabella Sciorra). It is based on the 1978 novel of the same title by Richard Matheson and directed by Vincent Ward.

Chris and Annie's idyllic marriage is shattered when their two children are killed in a car wreck. Annie becomes emotionally unstable and must be institutionalized, but the two manage to reconcile. However, four years later, on what the couple call their “double-d anniversary”, Chris is killed in yet another car accident, and finds himself in heaven where he is greeted by a spirit guide named Albert (Cuba Gooding Jr.). Despite his new home in paradise, Chris is unhappy without Annie. When she commits suicide out of guilt over Chris' death, he travels through hell to find her, determined to bring her back to Paradise.

The film was shot largely on Fuji Velvia film and is one of the few films to be done so. The Fuji Velvia film is known among landscape photographers for its vivid color reproduction and it shows. The film was not particularly successful at the box office. It earned $55,382,927 at the United States market, only the 40th most successful film of its year. It was released to mixed reviews, on one hand praised for the visuals of the overall film and strong performances from the two leading actors. On the other hand, it was criticized for significant deviations from its source novel, a sense of "morose sentimentality" and lack of genuine drama and/or conflict. It won an Academy Award for its Visual Effects and was nominated for the Academy Award for Best Art Direction (lost to Shakespeare in Love).