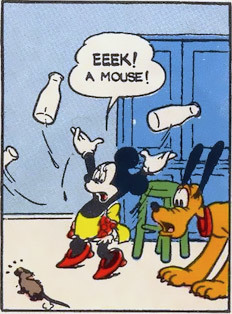 Hey, you might freak out too if you saw a tiny human running across your floor.
"Mice to me mean the little white furry things with the cheese fixation and women standing screaming on tables in early Sixties sitcoms..."
— Arthur Dent, The Hitchhiker's Guide to the Galaxy
Advertisement:

A staple of early domestic comedies in both film and television. The mere sight of a mouse (or sometimes another animal who is the subject of a common phobia) will drive a housewife up onto a chair or a table, where she stands shrieking, stomping her feet, and clutching the hem of her skirt until the rodent is captured or driven away. This is largely a Dead Horse Trope today, with old examples rooted in a very specific and sexist image of women dating back to the early part of the 20th Century, but it is still visible in old Looney Tunes cartoons and in the odd ironic reference. In some media, this is a unisex trope and involves a Mouse Hole or a Swarm of Rats for scare factor.

Cartoons will sometimes play with this trope by crossing it with the old myth (deemed plausible by the MythBusters) about mice frightening elephants, resulting in elephants that shriek and leap up onto some (possibly insufficiently-strong) object upon sighting a mouse. Other (common) ways to subvert this trope involve showing the wife standing unmoved while her husband shrieks and leaps to safety.

This trope is arguably justified by evolution. For the vast majority of human existence, the animals commonly associated with this trope — rodents, snakes, spiders, etc. — were potentially venomous or carrying disease, and a human's fear of it could be an evolved self-preserving instinct.

See also Cower Power and Why Did It Have to Be Snakes?. May overlap with Screams Like a Little Girl. See also You Dirty Rat!. Contrast Nice Mice and Resourceful Rodent. In Japanese media, frogs are often used instead. Supertrope to Elephants Are Scared of Mice.

Truth in Television, of course, as many people do indeed fear mice

, for various reasons both rational and irrational.

Example of:
Elephants Are Scared of Mice