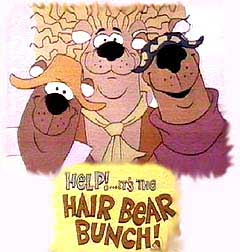 Hanna-Barbera produced this Saturday Morning Cartoon for CBS in the early 1970s. The show focused on a Comic Trio of bears living in, and often trying to escape from, the fictional Wonderland Zoo. The leader, Hair Bear (Daws Butler), was so named because of his Funny Afro. Aiding him were dimwitted Square Bear (Bill Callaway) and The Unintelligible Bubi Bear (Paul Winchell).

Like Wally Gator, the bears were often in a battle of wits with head zookeeper Eustace P. Peevly (John Stephenson) and his Dumb Muscle assistant, Lionel J. Botch (Joe E. Ross). Some of the other zoo animals contributed to Hair Bear's zany schemes.

Help! It's the Hair Bear Tropes!: