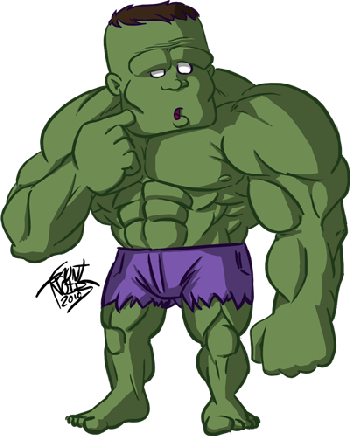 A characterization that leans very hard on the brawn side in Brains Versus Brawn. The Big Guy and The Brute are usually slightly dim at the very least (with The Smart Guy and Evil Genius at the opposite end of the scale; incredibly intelligent, but knocked over by a stiff breeze). Typically afflicted with a form of Hulk Speak. This is a common assumption: there's a reason Genius Bruiser is meant to be a shocker, even though there's no real reason brains and brawn should be mutually exclusive to begin with in Real Life. Overlaps with Gentle Giant in some cases, as well as Tiny-Headed Behemoth. A Sub-Trope of Personality Powers. Often Played for Laughs.

Almost Always Male; only in ultra-rare cases will you see very strong female characters be portrayed as lacking in brains. He might be only Book Dumb but Street Smart. Note that this also does not always apply to tactics; a character with this trope might know how to use every weapon he picks up, but if that is true, he will still lack intelligence outside that specialty (in which case he is shown as a Genius Ditz). When this character causes injuries and property damage due to being clumsy with his immense strength, he is Lethally Stupid. If he’s an athlete, he’s probably a Dumb Jock.

Compare Smash Mook. Contrast the Genius Bruiser and the Badass Bookworm. May overlap with Powerful, but Incompetent. These types are frequently, but not always, a Top-Heavy Guy. When this sort of character is paired with its opposite — someone who's very clever but runty and weak — it will form one half of Brains and Brawn.