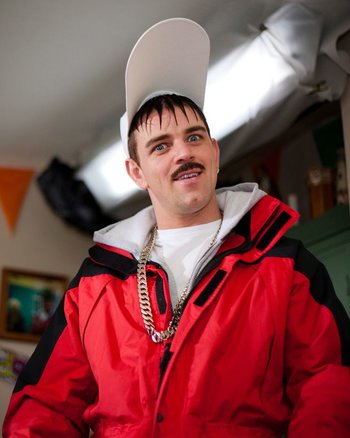 The Irish version of the Lower-Class Lout and Working-Class People Are Morons.

As Irish media gains more and more traction, the world as a whole is now starting to realise that not every Irish person lives on a farm, speaks in an Oireland dialect and is ridiculously friendly. The popular image of Ireland as a rural Arcadia has now evolved to reflect the country's many urban areas — Dublin in particular. As the capital produces most of the country's media output, stereotypes associated with the city are starting to appear in fiction. Skangers can be from anywhere in Irish slang, but it's a term strongly associated with the city.

North Dublin is generally considered a working class area, full of crime, drug dealers and aggressive young men ready to pull a knife on you as soon as the sun goes down. While this is Truth in Television to an extent, if a North Dublin character shows up in an Irish-set work, chances are they'll be involved in crime, on drugs or getting into at least one fight. You can thank Love/Hate for popularizing this.

This character will often be white (never mind that Dublin has had many other ethnicities living there since the 2000s but hey, Two Decades Behind), only wears tracksuit bottoms, has a shaved head or crewcut, always lives in a council estate (if they're not homeless), has a nickname that's basically just adding "o" onto their given name ("Dan-o" for example), and will rarely be seen without a joint or cigarette. Female variants will often be extremely outspoken, sexually aggressive and prone to walking to the shop in their pajamas. Or else they're prostitutes. The females tend to be shown more positively due to their independence. Notably, the term "skanger" originally referred to a female but is now considered unisex.

A more affectionate variant will be to play this character for comedy, often as a Lovable Rogue or endearingly stupid. The comedy variant is more likely to be on drugs and speak very slowly. Given the popularity of Conor McGregor (whose native Crumlin is technically the South Side of Dublin), expect some of these characters to be obsessed with MMA or lifting weights.

Compare Violent Glaswegian, The Bogan, Brooklyn Rage, Oop North, Joisey, Spicy Latina, and White Gangbangers. Fighting Irish usually overlaps with this character, as they're more prone to getting into drunken fights in the pub or the park.