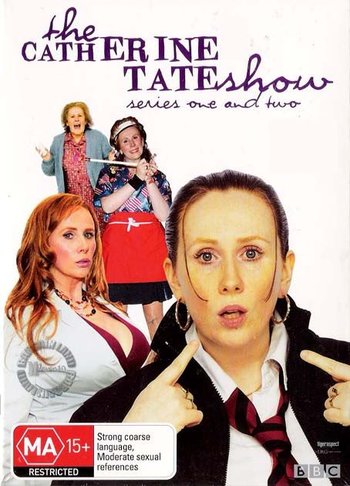 The Catherine Tate Show is a popular British Sketch Comedy (2004-2007) show written and performed by comedienne Catherine Tate, as the name suggests. It is based on a number of regular characters and introduced many catchphrases, including "Am I bovvered?", "What a fucking liberty!", "How very dare you!", "Who, dear? Me, dear? Gay, dear? No, dear!", "Have a guess!", "I can do that!" and "The dirty bastards!"

The best-known recurring characters are Lauren, a cheeky "chav" schoolgirl with attitude; and Nan, a foul-mouthed grandmother.

The Catherine Tate Show provides examples of the following tropes: