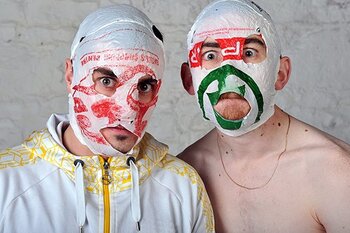 Blindboy Boatclub (left) and Mr Chrome (right)
A comedy hip-hop duo, from Limerick, Ireland. They've been around since roughly 2000, and have a slight cult following in their native Limerick due to their self-published CDs and prank calls. They only really got big in 2010, when they were featured on RTÉ's Republic of Telly. Their hit "Horse Outside" was favourite to be the Irish Christmas Number 1, and was part of an Internet campaign to beat X Factor winner Matt Cardle to the spot, but eventually lost. They released an album, Serious About Men, the following year, featuring both their older songs and prank calls and some new tunes. They were regulars on the RTÉ sketch comedy show Republic of Telly, although after dressing up as Black and Tans during a live broadcast without telling anyone, their relationship with the broadcasting company became fraught. Their "Guide to Limerick" was a hit, as were some of other other songs and sketches, and they pursued a position at the UK Channel 4, with a pilot for a potential TV show being broadcast after they produced a series for the Comedy Blaps program of the channel. They had a sell-out standup show on the Edinburgh Fringe, Continental Fistfight, which has gone on tour. They've also worked with Russell Brand, MTV Iggy (prior to its demise) and one of them (Blind Boy) was featured on a Newsnight section about the Irish Marriage Referendum. Most recently, they provided commentary for ITV's Almost Impossible Game Show, and are soon to broadcast a one hour documentary about the 1916 Easter Rising.They were described by The Guardian as "The Daily Mail's nightmare of a feral underclass come to life" and "two terrifying Irish goblin-type creatures" by Broadway Baby.
Advertisement:

They're basically a walking Memetic Mutation in Ireland, which is also where the bulk of their fanbase is. They have been well-received abroad, however, although mostly in areas with high amounts of Irish immigrants.

The Rubberbandits are also known for their hilarious prank calls, and for wearing plastic bags over their faces. And for using Limerick slang and speaking with stereotypical Limerick accents, which news outlets have felt the need to translate in the past, and for being stereotypical Limerick skangers.note The Irish equivalent of the British "chav" or "ned" stereotype. The closest USA analogue would be "redneck" or "trailer trash". They also supposedly met at Gaelscoil, and are certainly very fluent. Their sketches and songs often juxtapose very unlikely concepts together: for example, "Spoiling Ivan" was a bubbly children's song by a pair of self-proclaimed "gangster rappers" about a completely innocuous friendship between Mr.Chrome and young boy called Ivan, and included a reference to Ivan's parents being heroin addicts.Their YouTube page can be found here

, and the video for "Horse Outside" can be found here

. Just be careful, it's not exactly safe for work due to multiple instances of bad language, flipping the bird, sexual innuendo, etc. They are also active on their Facebook and Twitter pages, both of which are a mix of promotional material and tickets information and bizarre posts, although the Facebook page has a higher concentration of animal photos.