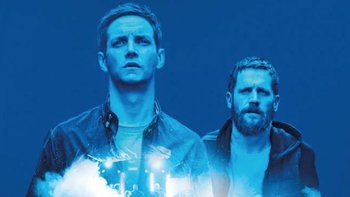 Dublin Oldschool is a 2018 Irish film, directed by Dave Tynan and starring Emmet Kirwan. It was co-written by both of them.

We meet a Dublin twentysomething called Jason, who is a habitual drug user and is ready to kick off a Bank Holiday weekend with a bang. What's not so fun is that he dreams of being a DJ, but never gets the chance, and is instead reduced to organising raves for other DJs to perform. His weekend doesn't get much better when he comes across his estranged half-brother Daniel (Ian Lloyd Anderson) now homeless on the streets of Dublin.