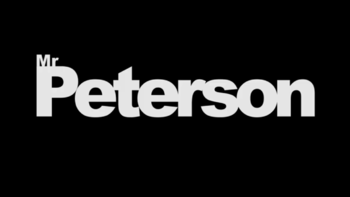 Mr Peterson is a 2020 Irish Black Comedy written by Miranda Hamilton and directed by Ronya Phoenix.

One morning, in a small Dublin suburb, an eccentric recluse called Mr Peterson is found murdered in his own front garden. It turns out the deed was done by the equally strange Robbie and Bonnie Clyde - who high tail it shortly after. But Hilarity Ensues as the police try to solve the case.

The film was the result of a lengthy improv Miranda Hamilton came up with in an acting class, transcribing most of what the actors came up with to create the script. Many of the actors reprised their roles for the screen version.

The full thing can be watched here