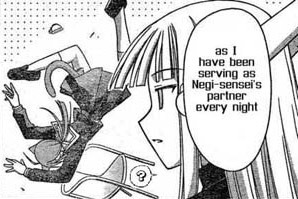 Sometimes a character is so shocked or surprised by an absurdity, non sequitur, or incredibly stupid remark from another character that the listener actually faints. The remark is so startling that it, quite literally, floors them.

There are usually two variations. One, nicknamed the "flip-take" is very popular in comic strips and animated cartoons. Early American comic strips

often used it in the final panel of a gag. Character A says the stupid/shocking line, causing character B to faint by falling over backwards with their legs up in the air. Usually done by only showing the feet up in the air, accompanied by a large thud sound.

The other, also called an "anime-fall", has the fainting character fall over forwards in the final panel of a gag onto his face, his limbs in a twisted mass above him. A device usually limited to humorous anime, though doesn't actually originate from there. In both instances, it includes, and is confused with, Wild Takes.

Usually, no one is harmed by taking a flying dive face-first into the ground (unless the animator thinks having them pop up with a bruised face would be funny). A less expressive equivalent would be Facepalm; a more expressive one would be a Head Desk.

Only a handful of comedians can successfully pull off a full-fledged Face Fault in live-action performance; notable examples include Jim Carrey, Steve Martin, Dick Van Dyke, and Chevy Chase. Live-action performers are more likely to do The Pratfall instead, which is a similar comedic trick but leaves the character on his rump.

Closely related to People Fall Off Chairs. Compare Fainting. Not to be confused with Face Plant, which is when someone hits the ground face-first after tripping or falling.

Darth Vader is your father

Luke Skywalker asks about his father, and Obi-Wan Kenobi openly reveals that it's Darth Vader. Oh, and Princess Leia from Alderaan is his twin sister, too.

Darth Vader is your father

Luke Skywalker asks about his father, and Obi-Wan Kenobi openly reveals that it's Darth Vader. Oh, and Princess Leia from Alderaan is his twin sister, too.