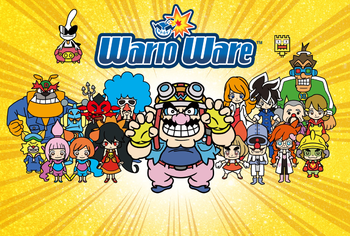 A Spiritual Successor to the "Sound Bomber" mode from the little-known Mario Artist: Polygon Studio, the WarioWare series is essentially a collection of hundreds of mini-games (referring to as microgames in-universe). And the gold-hoarding, gas-cloud-belching Wario is in charge of it all, aided by a cast of wacky friends and neighbors.

There are three important details to these mini-games:

That's pretty much the WarioWare games in a nutshell. Each game is a handful of about 200 or so "microgames" that come at you in roughly five-second increments, each time prompting you to do a simple task (POUR! STOMP! etc.). The microgames are shuffled at random, so you'll have to react fast to succeed and impress Wario and his cadre of microgame developers. Once you've unlocked everything, the games basically become quests to beat your high scores at all the games.

The plot of the games usually follow a similar through-line: Wario is strapped for cash in some manner, and happens to see a simple video game or console become successful—think of how Flappy Bird became a hit, only years before Flappy Bird. Wanting a piece of that pie, he grabs his phone and contacts every friend he has to make video games on the cheap for him.

Advertisement:
Games in the WarioWare series

Other releases include multiple WarioWare, Inc. trial versions and selected microgames, downloadable to a Game Boy Advance from Wario World and in one case from the Nintendo GameCube Preview Disc, as well as the DSiWare games Bird & Beans and Paper Airplane Chase (respectively Pyoro and Paper Plane in the British English version), standalone versions of minigames from Mega Microgame$! Wario also appears in the Super Smash Bros. series with his default appearance having him wear his clothes from WarioWare (his Wario Land appearance is available as well), along with a WarioWare-inspired stage and Kat & Ana and Ashley as Assist Trophies. Diamond City also appears as a course in the two Mario Kart arcade games Arcade GP and Arcade GP 2, though it bears little resemblance to its appearance in these games. Ashley has appeared as an unlockable costume in Super Mario Maker and downloadable content for Band Brothers P and an assist trophy in Super Smash Bros..

Rhythm Heaven was made by the same team that made this series, and it shows. The fourth installment of the franchise, Rhythm Heaven Megamix, features a full Crossover between the two series, and they cross-reference each other frequently.

Vote for your favorite installment here

open/close all folders
#-B
C-D
E-G
H-L
M-O
P-R
S-T
to grab it. They eventually make up when they find a new one at a game shop.
U-Y
WATCH!
Feedback