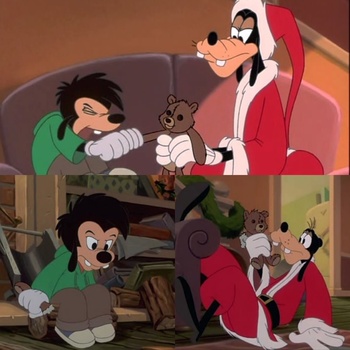 You're tearing me apart, Max!
Advertisement:

Two or more characters are fighting over an object, tugging it back and forth until it rips or breaks. Typically, the act of fighting over the object is itself caused by other unrelated factors and the object in question serves as an object to vent their frustrations over. Sometimes the object getting broken or torn is of incredible sentimental or personal value to one or both of the characters. Generally, the item will remain ripped, though sometimes the item gets mended. Subtrope to Nice Job Breaking It, Rivals!. See No MacGuffin, No Winner when the tearing happens to the MacGuffin. Contrast Judgment of Solomon, where an object is threatened to be ripped in half so as to settle a dispute between people who are fighting over the object in question.