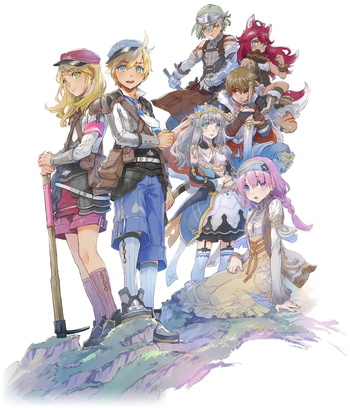 The 7th Rune Factory game, and the first new entry for the Nintendo Switch note Second overall, counting Rune Factory 4 Special. It was announced in the February 2019 Nintendo Direct and launched in Japan on May 20, 2021, with a scheduled Chinese/Korean release September 2, 2021, and an international release on March 22, 2022. The game is the first in the series to be fully developed by Marvelous AQL after the series' initial developer, Neverland Co., filed for bankruptcy in November 2013.

After collapsing in the middle of a journey, the bewildered protagonist awakens to the sound of someone screaming for help. All around them rise the trees of an unfamiliar forest, and they realize they've forgotten everything but their own name. Another scream brings them to their senses. The protagonist rushes toward the voice and saves a young girl from a monster attack. Before their strength gives out, they manage to bring her back to a nearby town called Rigbarth. After learning the protagonist has amnesia, the grateful townsfolk invite them to work with a peacekeeping organization known as SEED until their memories return. And so Rigbarth's newest ranger starts their life in this idyllic town. As they strive to protect Rigbarth from threats great and small, the protagonist becomes embroiled in a conflict that could change the fate of the world itself...