Due to its nature as a sequel, all spoilers for Naruto will be left unmarked. 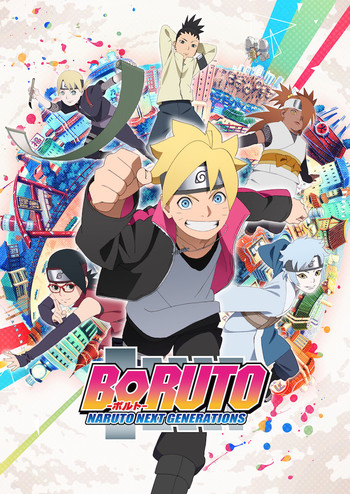 A new generation of Ninjas!note Starting from the center and then clockwise from bottom left: Boruto Uzumaki, Sarada Uchiha, Inojin Yamanaka, Shikadai Nara, Chōchō Akimichi and Mitsuki.
"Yes, I am a ninja. But there was a time when I held a deep resentment towards ninjas. The greatest ninja of the village, The Hokage. Lemme tell you this right off the bat. This isn't the story of a boy aspiring to become Hokage. That's my dad's story. Make no mistake, start to finish, this is my story. I am the Hokage's son and whether I like it or not, my dad is part of my story. The ninja who realized his dream, the Hokage and ... my tale begins as I began rebelling against my father for not paying me enough attention. In case I wasn't clear the first time, this is MY story. But in the beginning, for a short while ... my father played a central role in my story too."
— Boruto Uzumaki (Opening narration of Chapter 1)
Advertisement:

In a World… rife with Ninjas, one boy seeks to become the greatest ninja there ever was. This is not that story.

Boruto: Naruto Next Generations is a Spin-Offspring sequel to Naruto. Set fifteen years after the Fourth Ninja War, the ninja world enjoys a prolonged period of peace and prosperity, brought by the efforts of the Seventh Hokage, Naruto Uzumaki, and his allies, as well as radical technological advances which have greatly modernized the Hidden Villages. In this setting, a new generation of ninjas led by Naruto and Hinata's eldest son, Boruto Uzumaki, is being formed to inherit the world.

The series was written by Ukyō Kodachi and illustrated by Mikio Ikemoto. Kodachi was the author of Gaara Hiden: A Sandstorm Mirage and co-author of Boruto: Naruto the Movie. Ikemoto was an assistant to Naruto creator Masashi Kishimoto for the past 15 years. Kishimoto had a supervising role over the Boruto manga and he authored a one-shot manga that preceded the series, The Road Illuminated By The Full Moon that was adapted in episode 39 of the anime. From November 2020 onward, Kishimoto replaced Ukyo Kodachi as the writer.

The manga series began in Spring 2016 and is published monthly. The manga begins right after the end of Naruto Gaiden, starting with an adaptation of Boruto: Naruto the Movie before moving on to new content. There's also a novel series published by Jump J-Books, which details further adventures in Boruto's life and a Parody Super-Deformed series, Saikyou Dash Generations.

The anime adaptation began broadcasting in April 2017 as a direct sequel to Naruto Shippuuden, with Kishimoto promising that he would "make it better than Naruto." The anime follows the same story overall, though it starts with new original story arcs that take place before the start of the manga to give some time for the manga to advance forward. It also runs canonical original arcs which serve to expand the world, provide build up and foreshadowing for major plot points, and enhance the manga arcs when they come around.

Toonami announced that they would begin airing Boruto come September 29th, 2018, notably while its predecessor, Naruto Shippuden, was still airing on the block. It ended its tenure there on October 29th 2019, with Toonami saying it would likely return some time in the future, while Viz continues to produce and release dubbed episodes on home media.

Tropes with their own subpages: