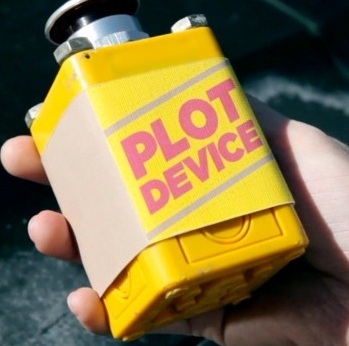 Use with Caution.
"This movie has so many contrived plot devices that TV Tropes deserves to be in the credits as lead writer."
— LittleshyFiM on the usage of this trope on

My Little Pony: Equestria Girls – Rainbow Rocksnote For added humour, the TV Tropes logo appears as he says this.
Advertisement:

A plot device is an object or character in the story whose purpose is purely to drive the Plot, maintain its flow, or resolve situations within it. It could be something everybody wants to obtain, a device that must be destroyed, or an annoying teenager who must be protected at all costs.

It may also be an object or gadget introduced early in the story for the sole purpose of solving a sticky situation later on.

The term is commonly used in a derisory manner, on the grounds that the best stories are character-driven, and using an object to make things happen is thus seen as a sign of bad writing. However, there are plenty of good stories which do indeed revolve around a plot device; equally, a plot device can very easily be used to generate conflict and thus spark a character-driven story.

Whenever someone uses the term derisively they often mean that something is being used as a gimmick (or worse, an Ass Pull) to Hand Wave resolutions to Plot Holes in a way that breaks the Willing Suspension of Disbelief.

Lampshade Hangings and Other References:

Almost by definition, stories have plot devices. Examples should be limited to lampshade hangings and references to the term.