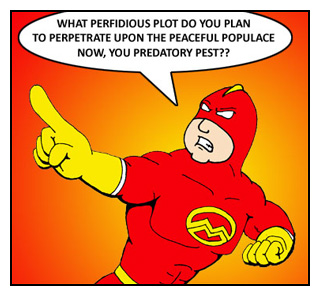 is a webcomic written and drawn by Ed Gedeon. It centers on Mr. Mighty, a Punch-Clock Hero, and his family. Other characters include his wife, Jane, who has a Dark and Troubled Past; his Bratty Teenage Daughter Summer who is trying to deal with new-found superpowers, and a host of teammates with Punny Names.
Advertisement:

Originally a gag-a-day comic, more recent Story Arcs have been more dark and dramatic. Originally drawn by Gedeon, it started with a MWF update schedule, but soon fell victim to Schedule Slip, and only updated weekly (or less). Eric Boismier took over art duties for a time and got the comic onto a regular twice-a-week schedule. Eric has since moved and left the strip, but Ed managed to (mostly) maintain the schedule, updating the strip on Mondays and Fridays. Unfortunately, due to the combination of his wife's death, and having to look for a job, Ed went on a nearly year-long hiatus after the February 6th, 2016

strip before resuming the strip on January 5th, 2017

. Updates were sporadic for the next several months, then artist duties were taken up by Elisa Price. Gedeon took over drawing again as of November 2018.

Originally on Webcomics Nation, then on SmackJeeves, it's current hosted on ComicFury at http:/eheroes.thecomicseries.com

This Comic Contains Examples Of: