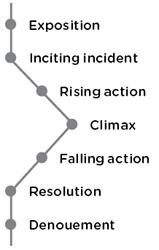 The seven basic plot points.
"Not just a bunch of stuff that happens."
— How NOT to Write a Novel
Advertisement:

Not what you're watching it for.

...In all seriousness, A plot is a fictional(ized) series of events that have some connection. The quality of a plot is often judged by how convincing that connection is established along the criteria of

Failure to meet those criteria results in a Plot Hole. If the first criterion is repeatedly violated, we have a Random Events Plot, the second criterion is not met if someone acts Out of Character, and a consistent failure to meet the third is called an Idiot Plot. Deus ex Machina is a desperate plot-advancing technique that does not quite link events in a story in a convincing manner but at least keeps it going.

Plots are usually driven by Conflict, which has a strong tendency to make stuff happen. According to Aristotle, Plot, together with Character and Spectacle, is one of the six items present in any story.

A Plot Point is an important event or state of affairs that the viewer or reader is required to be aware of in order to follow the plot. An object or character whose only purpose is to drive the plot (i. e. provide the connecting element between events) is called a Plot Device. Similarly, a Plot Coupon is an object that acts as a key to advance or resolve a plot. In contrast to the Plot Device, it is actively and purposefully used (and often also sought out in the first place) by the characters to reach a goal, while a Plot Device doesn't necessarily require a character's volition to advance the plot. See also MacGuffin and Magnetic Plot Device.

A popular definition of how a plot as a whole should progress within the "running time" of a work is the succession of five acts: exposition, rising action, climax, falling action and resolution. However, a work of fiction can contain more than one plot. This is called subplots or Plot Threads.

In some formats, the plot can take a back seat to other aspects that are deemed more important. For these cases see No Plot? No Problem! and Excuse Plot. Also bear in mind the Sliding Scale of Plot Versus Characters, for when character development overtakes the overall plot.

No examples, please; this merely defines the term. As one of the major Super Tropes, the concept of Plot is omnipresent. There's no need to list Plot as a trope on any work's page or to list works here.''