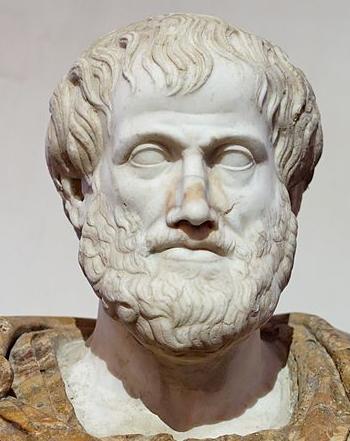 "A likely impossibility is always preferable to an unconvincing possibility. The story should never be made up of improbable incidents; there should be nothing of the sort in it."
—Poetics
Advertisement:

Aristotle (Ἀριστοτέλης, 384–322 BC) was a Greek philosopher, a student of Plato's, and either the second or third (after Plato and, depending on who you're asking, Xenophon) from whom we have complete works. He was the first philosopher to write treatises addressing the subjects of his philosophy directly; Plato had been rather more indirect, preferring to write dialogues involving Socrates instead. Aristotle was also the first philosopher to attempt a complete survey of human knowledge (except for mathematics), making him an Omnidisciplinary Scientist.

He also served as tutor to Alexander the Great, after differences with Plato and his Academy led him to leave Athens. His work also heavily influenced Galileo—even though Galileo's most enduring work in physics disproved Aristotle's theories in the subject,note viz., Aristotle's theories held that objects fell at a constant speed that varied based on their weight/mass; Galileo's experiments proved that they fell at a constant acceleration (i.e. a constantly increasing speed), and that the rate of acceleration was constant for all objects irrespective of mass so long as air resistance was held constant and his work in astronomy severely undermined themnote Galileo's observations of sunspots, mountains on the Moon, the phases of Venus, and the moons of Jupiter directly contradicted Aristotelian claims that the heavenly bodies were perfect, uniform spheres in perfect circular orbits around the Earth, though they did not directly disprove geocentric models of the Universe. in that field, Galileo always made sure to emphasize his respect for the ancient genius.

Of particular note to tropers is that he wrote the Poetics, studying tragic plays, epics, and comedy, making him the first troper of whom we have knowledge, and many tropes were first diagnosed by him.

Aristotle is also important within science. His work of categorizing plants laid much of the foundation for today's biology. He also tried himself at physics, and his theories were commonly accepted for almost two thousand years — until people started to actually test them, and found many of them to be completely wrong. For example, Aristotle used logic to determine that if two objects with similar form and volume but different mass are dropped simultaneously, the heaviest one will land first. Medieval natural philosophers started to realize that this was wrong, and later disproved it by actually dropping two objects with said qualities, and finding that they landed at the same time.

All in all, he is the sole person to have acheived the impressive feats of his ideas 1)turning up in just about every modern textbook issued to students 2)...for being wrong (the one notable exception is the field of Logic).

Works of Aristotle which have their own pages: