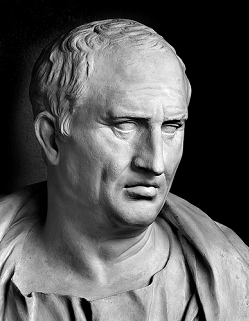 "Non nobis solum nati sumus ortusque nostri partem patria vindicat, partem amici.
(We are not born for ourselves alone; our country, our friends have a share in us.)"
— Cicero, De Officiis
Advertisement:

Marcus Tullius Cicero (sometimes called "Tully" in later references), 106-43 BC, was a prominent statesman and the preeminent orator of late Roman Republic, credited by some for being single-handedly responsible for the persistence of the ancient Greek intellectual tradition in Western culture. This is as much for the quality and content of his writings (which is quite good and interesting) as it is for its sheer volume. While by no means complete, a vast quantity of Cicero's writings and especially his letters have survived into the present day. The First Century BCE has always known to be an unusually rich era (before and afterwards) in terms of availability of information, but even in that light, Cicero stands out.

Cicero's writings in prose on a variety of subjects, provided a model for later prose writers in Latin, and thanks to being described by the Church Fathers as "a righteous pagan", his writings were preserved and served as a model for prose writers in The Middle Ages to The Renaissance, during which time, Cicero's reputation as a prose stylist faded in light of Montaigne (who was not a fan of him) and Francis Bacon. Cicero's works provide a nearly day-to-day glimpse of the last days of the Roman Republic and the first days of the Empire, and several of his works serve as a model for political oratory well into the 21st Century.

His legacy is very complicated. Elements of his work have found a place of timeless applicability in the scholarship of political theory, but he was also very much a product of his time. His views on republicanism, liberty, the relationship between the rich and the poor, and slavery, stand very much at odds with the mainstream of democratic theory, and the post-Enlightenment world which his works inspired. His role as the last great champion of the Optimate cause highlights this contrast. His defense of political liberty against the emergent dictatorship of the Second Triumvirate is tempered by the understanding that the political status quo of the Republic was elitist, violent, unresponsive to reform, and irrevocably destroyed. Regardless of his politics, Cicero as revealed in his own writings, is a deeply compelling individual, someone who is interesting for his flaws and failures as much as he is for his insight and virtues. He was a smart man, deeply human, vacillating and politically inconsistent and yet capable of courage when he tried to stop the erosion of the Republic during the foundation of the Second Triumvirate. His death, inaugurating the partnership between Antony and Octavian, marks a key moment in the shift from Republic to Empire, as the constitutionally empowered Triumviri turned the Republic de jure as well as de facto into a tripartite dictatorship.

During the wars following the death of Caesar he returned to Rome to lead the Senate in opposition to Mark Antony. In doing so, he attempted to play Octavian and Mark Antony against each other, which succeeded for a while but backfired when the ensuing Battle of Mutina, despite ending in Antony's defeat, led to the death of both sitting consuls. In this political vacuum, unseen since the darkest days of the Second Punic War, the leaderless senatorial army defected en masse to Octavian, who struck a bargain with Antony and marched on Rome. The emergent Second Triumvirate launched a fresh round of proscriptions which decimated the last vestiges of the senatorial faction. Cicero, who had led the Senate in opposing Mark Antony at every turn and was the mastermind behind his defeat at Mutina, had earned the triumvir's personal enmity. His addition to the proscription list was demanded as a condition for the foundation of the Triumvirate. After evading his killers for some time with help from his many sympathizers, he was eventually betrayed. He was killed, according to legend, with some amount of dignity: unable to escape or fight, he acted as a true philosopher and calmly offered his neck to the centurion's sword. He was brutally executed and dismembered, with his head and hands put on display in the Roman Forum, and left to rot for days. However, his memory and his works were preserved and published by Emperor Augustus, who probably did regret condoning his death.