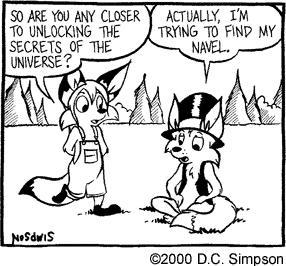 The Warden: What did you want to talk about, Alistair?
Morrigan: His navel, it seems. He's certainly been contemplating it enough.
— Dragon Age: Origins
Advertisement:

A type of meditation where one stares at one's navel. Navel-gazing has come to mean anyone being extremely introspective or existential.

When contemplating his or her navel, a character will sit quietly and contemplate the purpose of Life, the Universe, and Everything. In visual media, this can be accompanied by surreal visuals (sometimes an excuse to recycle material from previous episodes). In written media, this can involve long, usually internal monologues.

Depending on the show, this can be thematically appropriate or a pause in the action. When used as padding, and if little thought is put into them, these scenes can be annoying — the poor viewers may find themselves sitting through five minutes of "Who am I? Who is me? I is me, but you is not me. The universe is not real to me, unless it is real to you, but who is you? Who is..." and so on against a Clip Show background. Depending on the delivery, it can be really creepy.

When a character does a voice-over of the same nature during the series, it's called a Fauxlosophic Narration.

When the moment becomes significant as an energizing, self-motivating speech, it is a "No More Holding Back" Speech. When a character frequently indulges in navel contemplating, he's The Philosopher.

Compare with Character Filibuster. And compare with Author Filibuster, where the character is giving answers instead of questions.

Not to be confused with Contemplating Our Navy. If the viewers get to contemplate a character's navel, it's either Bare Your Midriff or Navel Window.