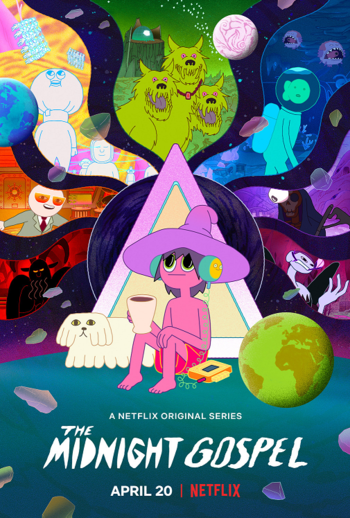 "There are beautiful, wondrous worlds, full of intelligent beings with stories to tell...and I'm gonna interview them, put my interviews online and make a bunch of money, and suck my dick!"
— Clancy, to his sister while asking her for money
Advertisement:

From Pendleton Ward, the mastermind behind Adventure Time, and comedian Duncan Trussell comes The Midnight Gospel, a psychedelic Netflix animated series concerning the exploits of Clancy (voiced by Trussell), a space podcaster who uses a VR multiverse simulator to interview beings living in other worlds, many of which are on the brink of catastrophe. The show is more or less an Animated Adaptation of Duncan Trussell's podcast Duncan Trussell Family Hour, with the episodes using real audio from said podcast.

For those familiar with Ward's previous work, it's one hell of a trip (if not more so). However, if you've read the above quote, you'll know that it's most definitely not for kids.

Released (approriately enough) on April 20th, 2020, the teaser can be viewed HERE.

The full trailer can be seen here.

On June 3, 2022, Duncan Trussell announced that the series was quietly cancelled